A transport truck hauling dangerous goods was involved in a traffic accident on June 13th on the Queen Elizabeth Way Highway in St. Catharines, Ontario.

The vehicle carrying phosphine, an extremely flammable substance and very toxic by inhalation, has rolled over resulting in the emergency response of the Ontario Provincial Police.

Hazardous goods cleanup crew determined there was no leak. The Police ordered a precautionary evacuation of people within a 2-km radius of the incident. Meanwhile residents were also asked to close windows, doors and turn off air conditioning.

The QEW remained closed in both directions until late into the night to allow the crews to move the truck and take the necessary precautions to avoid leakage of the toxic product.

No injuries were recorded. 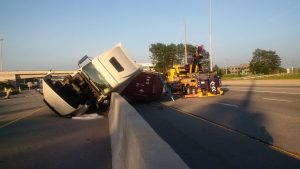